On Monday, the Erste Bank Open’s main draw kicks off at Vienna’s Stadthalle. In Austria the 26th of October is “Austria National Day” and thus it is only fitting that the fans will be treated to two matches of their local heroes on the Viennese centercourt.

Dennis Novak will kick things off in the first match of the day at 2 pm against Kevin Anderson. The former top 10 player from South Africa won the tournament in 2018 but has since been ailing from an injury and is slowly making his way back to top form. The second match of the newly introduced “Day Session” will be between French fan-favorite Gael Monfils (FRA/7) and Spaniard Pablo Carreno Busta.

For the first time in the history of the Erste Bank Open, a “Night Session” will commence not before 5.30 pm. Russia’s youngster Andrey Rublev will meet a qualifier. Followed by that, Austria’s number 3, Jurij Rodionov, will face-off against Canada’s current number 1, Denis Shapovalov on the centercourt.

On the Next Gen Court – this year without an audience due to the COVID-19 crisis – the day kicks off with yet another great matchup in Croatian Borna Coric taking on American Taylor Fritz. The day on the second court is rounded out by Dominic Thiem’s first competitive appearance in the Stadthalle this year, as he will play the doubles with buddy Dennis Novak against the British favorites Jamey Murray/Neal Skupski. This match will not start before 5 pm. 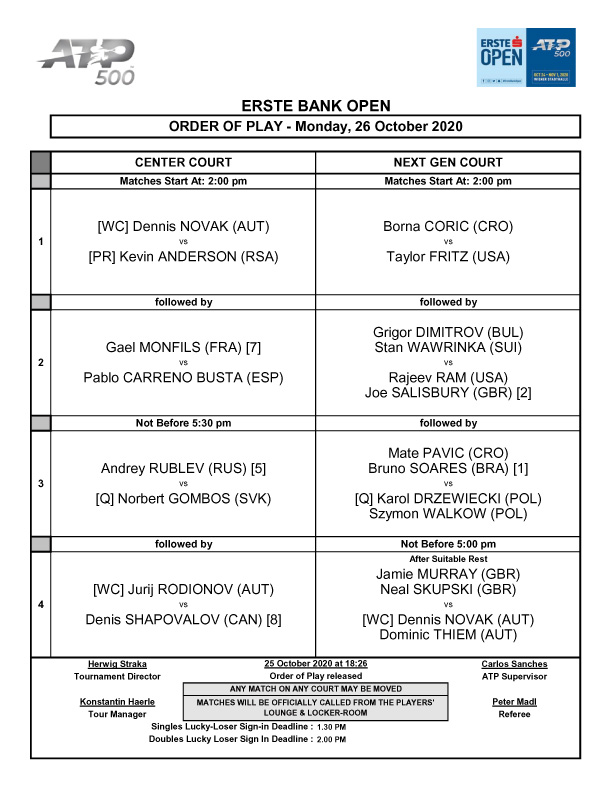