Today, Jürgen Melzer starts his farewell tour in the Wiener Stadthalle. His first opponent is none other than Milos Raonic, Canadian super server and currently no. 20 in the ATP World Tour rankings. The match will not start before 7pm. With the enthusiastic Viennese crowd backing Melzer an upset might be in the cards.

The main draw already starts at 1pm with the match between Marton Fucsovics (HUN) against wildcard player and NextGen star Felix Auger-Aliassime (CAN). This match is directly followed by the first appearance of a seeded player: Borna Coric (CRO/6) will take on Spaniard Albert Ramos-Vinolas.

Not before 5pm the tournament’s no. 2, Kevin Anderson from South Africa, will enter the centercourt to face off against rising Georgian star Nikolos Basilashvili, directly followed by crowd favorite Melzer taking on Raonic. To top things off, there will be a doubles match on the center court between John Isner (USA)/Steve Johnson (USA) and Jamie Murray (GBR)/Bruno Soares (BRA). 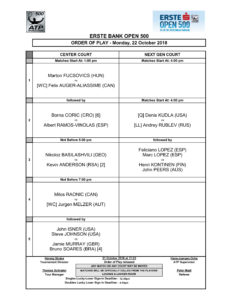