All dreams of a revenge-match between Dominic Thiem and Richard Gasquet in the first round of the Erste Bank Open 500 were crushed on Sunday, when the Frenchman had to withdraw from the tournament after consultation of the tournament doctor. Gasquet has a right wrist-injury.

Thiem’s new first-round opponent is Ruben Bemelmans, who successfully fought his way through qualification as he beat Argentinian Guido Pella 6-4, 6-0 in the second and final round. The 30-year old Belgian is currently ranked at world no. 110. In the first round of qualification he beat Thiem’s countryman Sebastian Ofner in three sets. Thiem and Bemelmans will face-off for the first time on the ATP World Tour when they will clash on Tuesday, 23 October. 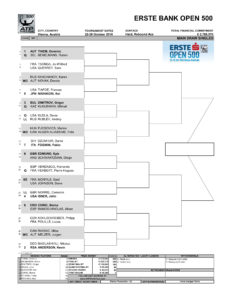