The second day of the Erste Bank Open’s main draw has lots and lots of great names to offer – on the centercourt as well as the #glaubandich court at Tennis 2 Go in the inner city. Not only will the numbers 1,2 and 4 take center stage on Tuesday, but also Dennis Novak, the only Austrian in the main draw.

The program on the centercourt starts as usual at 2 pm. Casper Ruud (NOR), the tournament’s number 4, will open the day against Lloyd Harris (RSA), directly followed by the first centercourt appearance of superstar Stefanos Tsitsipas who will take on Bulgaria’s Grigor Dimitrov in a re-match of last years round last 16 when Dimitrov kept the upper hand.

Not before 5.30 pm Alexander Zverev, the tournament’s number 2, will join the action. He will face Serbia’s Filip Krajinovic.

To round things off, the Stadthalle will become really loud when Dennis Novak will take on Italian qualifier Gianluca Mager.

Packed schedule at Tennis 2 Go
The line-up at the second matchourt on the Wiener Heumarkt also leaves no wishes unfulfilled. Here, the action already starts a 1 pm with the match between Felix Auger-Aliassime (CAN/6) against Ricardas Berankis (LTU), which is directly followed by Indian Wells champion Cam Norrie (GBR) against Marton Fucsovics (HUN). In the third single of the day, Dusan Lajovic (SRB) will take on US qualifier Frances Tiafoe. 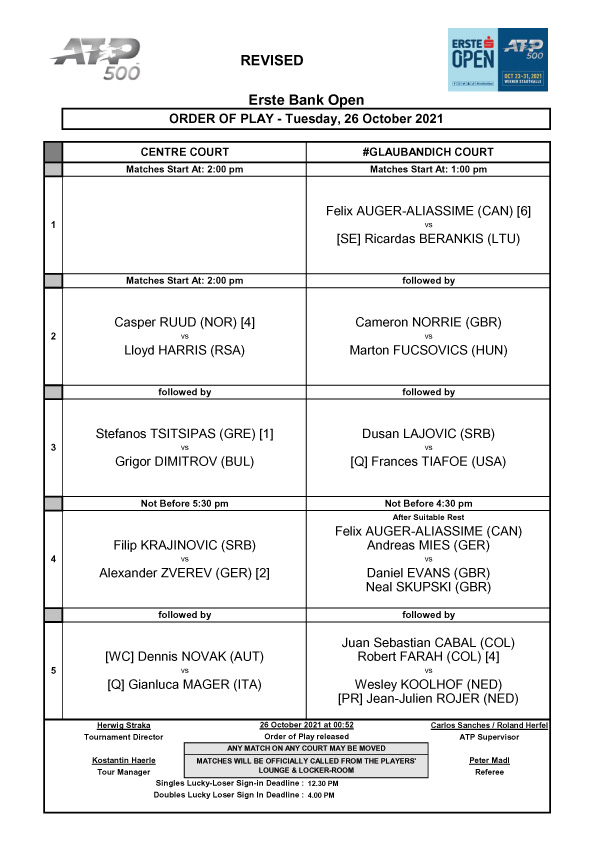