The Wiener Stadthalle was once again sold out, but the fans saw Schwartzman cruising to victory in the beginning. The Argentinian broke Thiem already in the first game and wasn’t jarred when Thiem immediately got the re-break. Schwartzman went on to break Thiem twice more and grab the first set 6-3.

Momentum changed
In the second set, Thiem finally found a way into the match. He had a couple of break points in the first games but wasn’t able to convert any of those. This finally changed in the ninth game when Thiem broke Schwartzman to make it 5-4 and then easily served out the set.

Thiem got off to a hot start in the third taking a 2-0 lead. Afterwards, both players held their serve until it was 5-4 Thiem. Schwartzman had to stay on serve and already led 30-0 but Thiem made the next four points and sealed the match.

Schwartzman celebrated, too
The Viennese crowd didn’t forget about the runner-up: Schwartzman once again was celebrated with “Diego, Diego”-chants. Schwartzman thanked the crowed during the winner’s ceremony and again earned “Diego”-chants in return. 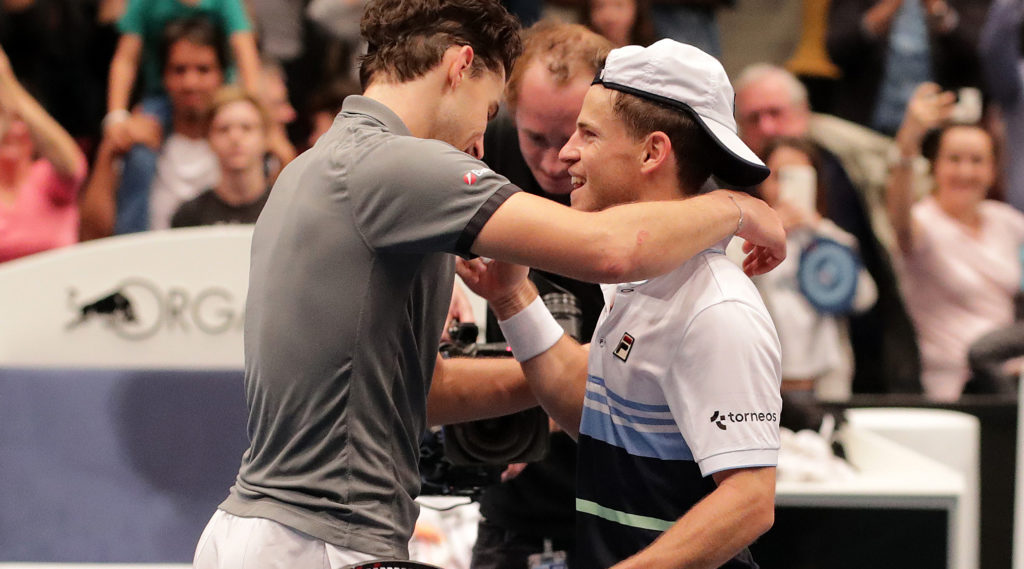 “He was just too god today”, said Schwartzman. “We are good friends on and off the court. I know how hard he works and I congratulate him.” Then he added: “I’ll be back next year and will try to win the trophy.”

The big moment
At 5.05 pm Thiem, with what seemed one or two tears in his eyes, was presented the winner’s trophy.

In his first statement he showed his respect for Schwartzman: “He has become a very important person for me. Diego, you are a good friend and it has been an honor to play against you here.” Thiem once again was impressed by the “surreal” atmosphere at the Wiener Stadthalle: “You have a big share in this victory”, Thiem said to the crowdd, which thanked him with standing ovations.

Record for Thiem
For Thiem, it was the 16th title overall and the fifth this season. That makes him the only player in 2019 to have won five ATP tournaments.