Stefanos Tsitsipas, the world’s best doubles pairing, and a former Vienna winner will grace Tennis 2 Go on the first day of the main draw. And then there will also be an Austrian winner for sure.

Olympic champions
World class tennis not only at the centercourt in the Wiener Stadthalle, but also at Tennis 2 Go on Monday. The day kicks off at 2 pm with the world best doubles pairing: Nikola Metkic (CRO)/Mate Pavic (CRO) will take on Tim Puetz (GER)/Michael Venus (NZL) to start their campaign for the Vienna title. The Croatians have not only won some ATP 1000 titles this year but also the titles at Wimbledon and the Olympic Games. It doesn’t get any better than that.

Find all the information about the centercourt matches here

Tsitsipas has a crack at doubles
The Erste Bank Open’s number 1, Greek Stefanos Tsitsipas, will also try his mettle in the doubles competition. Together with Spaniard Feliciano Lopez he will take on Ivan Dodig (CRO)/Marcelo Melos (BRA).

Vienna champion 2018, Kevin Anderson, hits the stage not before 4.30 pm. On his way back from a nagging injury, the man from South Africa successfully mastered the qualification and will now fight Australian Alex De Minaur for a spot in the second round.

Austrian winner guaranteed
The day is closed out by an all-Austrian doubles battle. Lucas Miedler and Alex Erler have successfully mastered the qualification and will now clash with fellow countrymen Oliver Marach and Philipp Oswald. 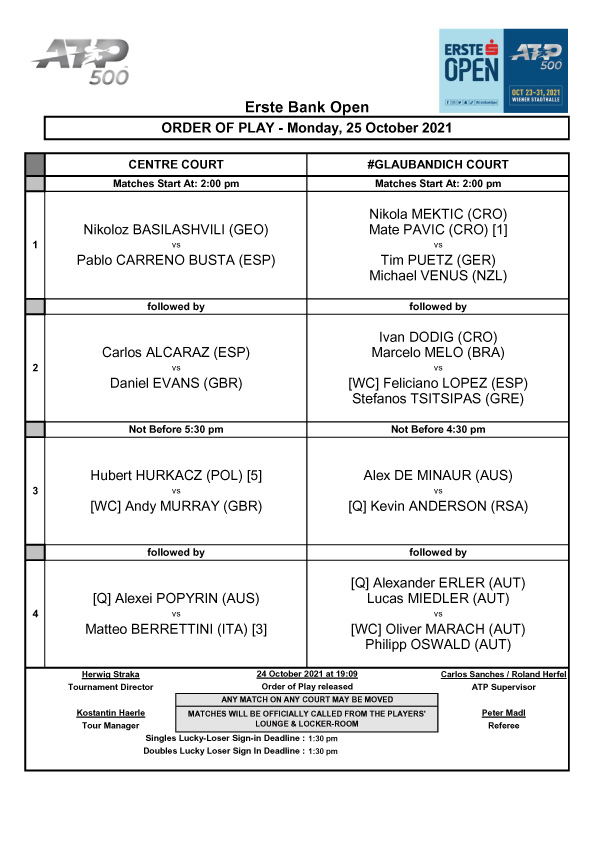