The main draw is in

As was to be expected because of the word-class field, this year’s Erste Bank Open will spoil the fans with some great match-ups already in the first round. The world’s number 1, Novak Djokovic, will for example take on his fellow countryman Filip Krajinovic, while Dominic Thiem, the tournament’s number 2, will get the chance for a rematch against Japan’s Kei Nishikori, to whom he lost in 2018’s quarter finals here in Vienna.

In the quarters, Djokovic could meet Argentinian Diego Schwartzman, last year’s Vienna finalist, whom he beat not too long ago in the Rome finals. In the lower quarter, Austria’s wildard player Jurij Rodionov will face a tough opponent in Canada’s youngster Denis Shapovalov, while tournament co-favorite Stefanos Tsitsipas will meet up with Germany’s Jan-Lennard Struff.

In the lower table, Thiem could face young Russian Andrey Rublev in the quarter finals. The second Austrian with a wildcard, Dennis Novak, will play against Kevin Anderson (RSA), the winner from 2018. Daniil Medvedev (RUS) has a tough first round draw in Australia’s up and coming Alex de Minaur. 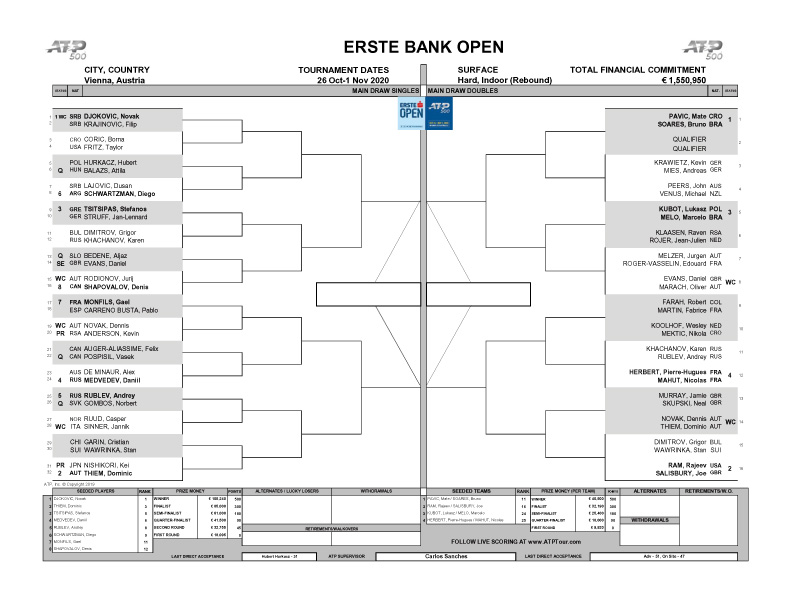