On Tuesday, Dominic Thiem will see his first action at this year’s Erste Bank Open at the Wiener Stadthalle – on „his“ day, the so-called „ThiemsTag“. Before his clash with Vienna champion from 2011, Jo-Wilfried Tsonga, he talked with the press about his home tournament, the fans’ expectations and his countdown until the first service.

Question: Are you ready for the match?
Dominic Thiem: I had a good week. Last Wednesday I had my first training on the centercourt and then some good practices. I reduced the intensity the past two days and I’m ready for the match against Tsonga.

How are you preparing against Tsonga?
I haven’t played against him in a long time. Must have been 2016 in Indian Wells if I remember correctly. I will have a chat with my team, watch some video from Metz where he won the tournament lately. His strengths are no big secret: good serve and then immediately attack with the forehand.

Your opinion on the court in the Stadthalle?
The court is great. Naturally, it has changed since last week. The surface has gotten a bit smoother, but I think it is a fair court for everybody – not too slow, not too fast and, I think, pretty similar to the past years.

Will you stick to your aggressive tactic?
I had good success with it in Asia. The match against Tsonga will again be pretty much about serving well. We both do that. I have to keep on the pressure and try to get some points at the net.

Full program on “Thiemstag”
The match between Thiem and Tsonga is scheduled as the third one on the centercourt (not before 5.30 pm). Before, Feliciano Lopez (ESP) and Gilles Simon (FRA) kick things off at 2 pm on the centercourt, directly followed by Hyeon Chung (KOR) against Milos Raonic (CAN). After the Thiem-match, Jannik Sinner (ITA/WC) and Philipp Kohlschreiber (GER/Q) close out the day. The Next Gen Court will not only see three doubles matches but also the singles between Guideo Pella (ARG/7) – Aljaz Bedene (SLO/Q) and Nikoloz Basilashvili (GEO) – Fernando Verdasco (ESP). 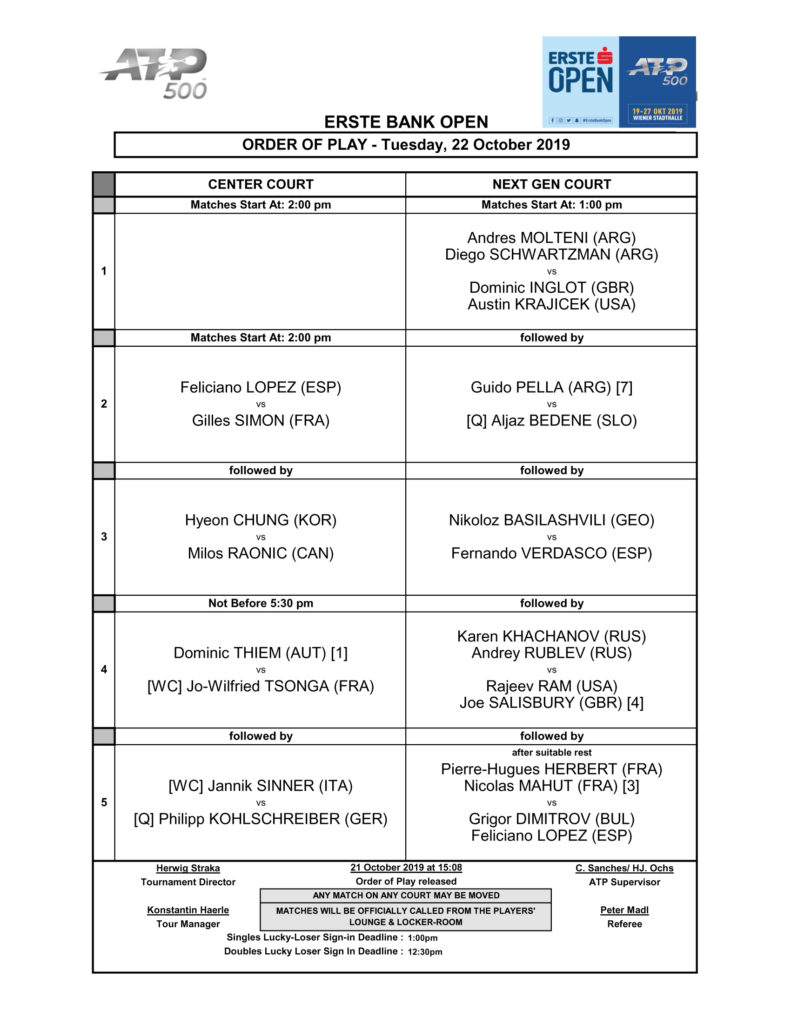