On Thursday the round of last 16 is played at the Erste Bank Open in Vienna. Two Austrians aim to advance to the quarter finals.

Youngster Jurij Rodionov (AUT/ATP 153) kicks off the day session at 2 pm on the centercourt with his match against Daniel Evans (GBR/ATP 33). Rodionov knows what awaits him against the number 33 in the world: “He is very uncomfortable to play, has got a varied game and knows how to adapt.” Still he is optimistic, as he has seen with his win against Denis Shapovalov that “my journey is headed into the right direction.”

This match is followed by Daniil Medvedev (RUS/ATP 6) against Vasek Pospisil (CAN/ATP 81). The Russian is the clear-cut favorite in this match against a qualifier.

The night session commences with Dominic Thiem’s (AUT/ATP 3) second appearance this week. He will face Chile’s Cristian Garin (CHI/ATP 22) who is coincidentally coached by Thiem’s coach Nicolas Massu during Davis Cup matches. Thiem knows what he will have to do against the rising star from South America: “I think he’s more comfortable on clay than on hardcourt. I will try to play a fast game, take away his time to line up shots.”

Rounding things out will be Greek Stefanos Tsitsipas (GRE/ATP 5) against Grigor Dimitrov. A match-up made in heaven for tennis aestheticians as two of the most elegant one handed backhands will meet.

On the Next Gen Court Hubert Hurkacz (POL) will play against Lorenzo Sonego (ITA) and Andrey Rublev (RUS/ATP 8) against Jannik Sinner (ITA). 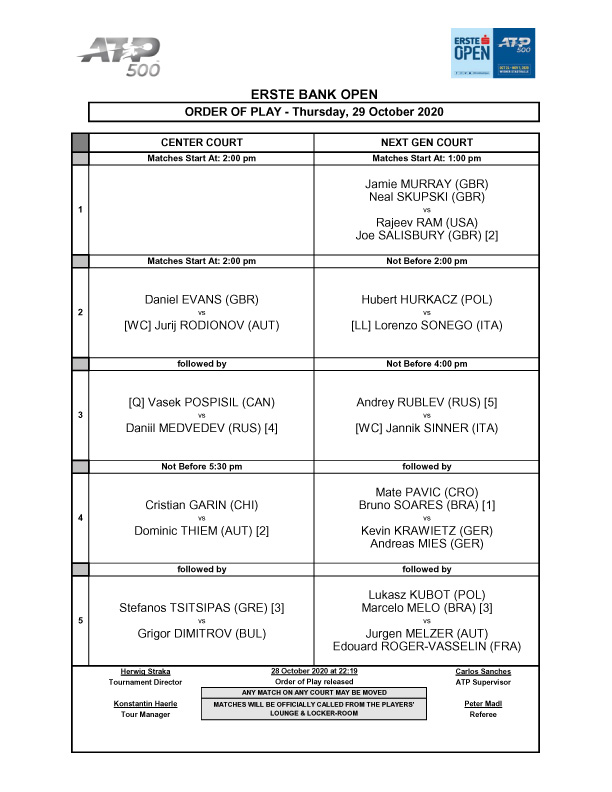