Thiem – Tsonga to meet in first round

The draw for the Erste Bank Open on Saturday held a real challenge for Dominic Thiem in the first round: On Tuesday he will meet the former Vienna champion and multiple finalist Jo-Wilfried Tsonga (FRA). Tsonga said afterwards: “That’s not an easy draw, but I have to accept it. It’s a big challenge for me.” As chance has it, the two just played a spectacular exhibition on Friday on the roof of the Erste Campus…

One of the toughest draws
Thiem had mixed reactions to the draw: “It’s definitely one of the toughtest draws I could get, but the tournament has such an awesome roster of players that I just have to take what comes. Whenever I play against him – but especially here in Vienna – I have to think of our legendary match in 2013. It’s nice that I get a chance for revenge now. He’s one of the best players of the past decade for sure. In the last two years he had a lot of problems with injuries but he’s come back strong and won Metz lately.”

Also in Thiem’s quarter of the draw is Matteo Berrettini, the Italian shootingstar of the year. Just last week, he beat Thiem in the Shanghai quarter-finals. Berrettini will face Britain’s Kyle Edmund in the first round. Thiem and Berrettini could meet in the semi-finals.

The second Austria will also face a Frenchman in the first round: Dennis Novak, who was one location for the draw, will play against no. 4 seed Gael Monfils. Novak: “That will be a cool match. He is an unbelievable athlete who you just have to love watch playing. I only hope it’ll not be too much fun for him.

Karen Khachanov, the tournament’s no. 2, will play against Poland’s Hubert Hurkacz in the first round. 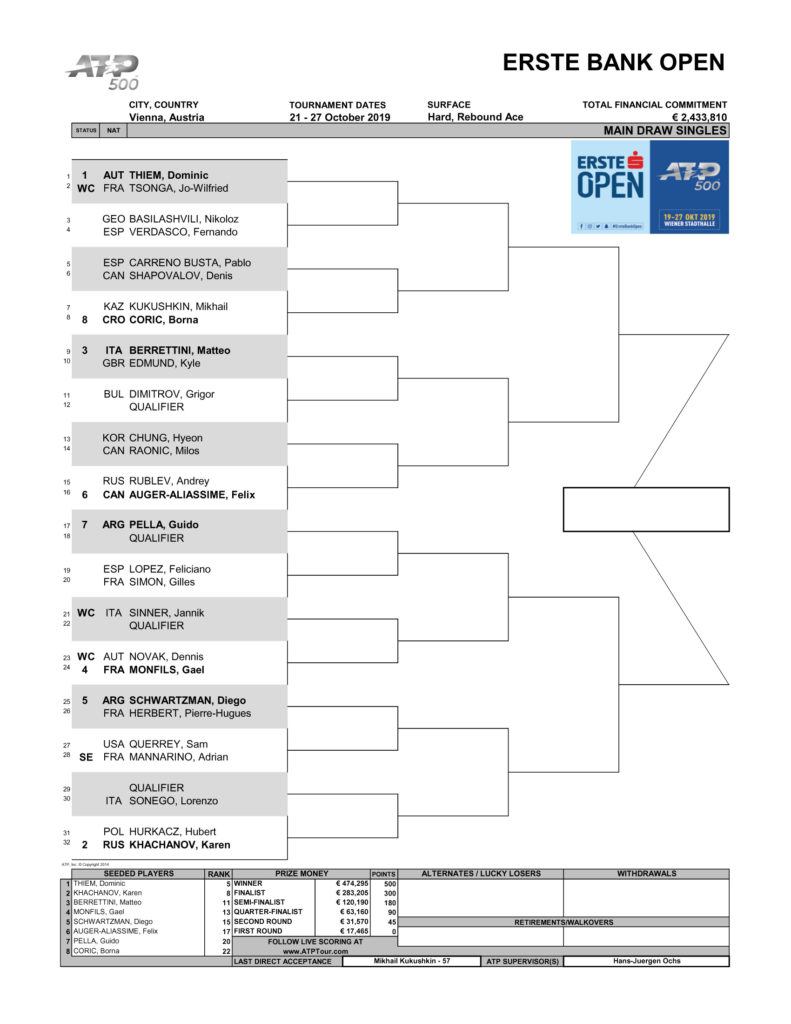