And here we are: the last two men standing in the Erste Bank Open main draw will fight it out on Sunday from 2pm for the title in Vienna’s Stadthalle. US qualifier Frances Tiafoe challenges Olympic champion and number 4 in the world, Alexander Zverev from Germany.

Tiafoe is THE surprise of this year’s tournament in Vienna. Coming through the qualification, the 23-years old eliminated Dusan Lajovic (SRB), Stefanos Tsitsipas (GRE/1), Diego Schwartzman (ARG/8) and Jannik Sinner (ITA/7) in the semi final. Against his semi final opponent he had previously lost both matches played: in Antwerpen, as well as at the NextGen finals in Milano (both in 2019). His last (and to date only) tournament victory dates from 2018 in Delray Beach.

Zverev’s year went quite differently: the 24-years old already won 4 titles this year, among those not only the Olympic Games in Tokio, but also two ATP Masters 1000 titles. In their head to head, Zverev leads 5-1 with Tiafoe’s only win coming in 2017 in Cincinnati. Their to date last match came in Beijing in 2019 which Zverev easily won in straight sets. 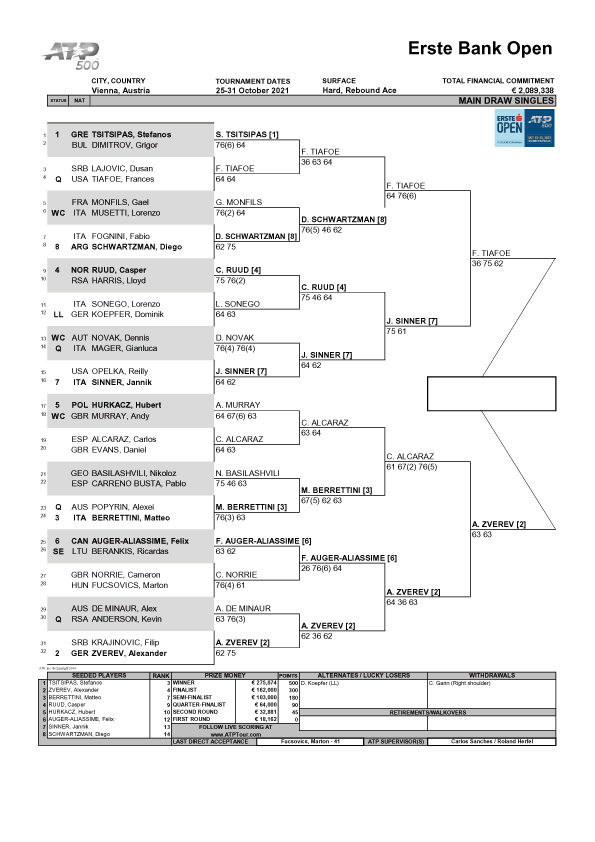