US qualifier Frances Tiafoe on Friday reached his first ATP 500 level semi final at the Erste Bank Open. In a crazy match he beat Diego Schwartzman, the finalist from 2019, 6-4, 7-6 (6).

In their third match-up it was the first win for Tiafoe and at the same time the most important, as the 23-years old never got that fear on this level.

Roller coaster ride
The American took a quick 3-0 lead in the first set, but Schwartzman – never one to back down easily – roared back to even the score. At 5-4 Tiafoe, the American broke his opponent yet another time to seal the set.

In the second set, Tiafoe already served for the set when his nerves got shaky and he started to throw his racket. There were warnings and Schwartzman somehow made it into the tie break, where he already had a set point at 6-5, but three points in a row finally got Tiafoe through to the semi final.

Sinner eliminates Ruud
In the semi final Jannik Sinner, the tournament’s number 7 awaits. The Italian overcame the number 4 seed Casper Ruud from Norway in yet another “young guns” duel 7-5, 6-1. Sinner started the match with a break, but Ruud leveled the game at 3-3. Sinner, however, got one more break to take the first set 7-5. In the second, Sinner got two quick breaks to jump out to a 3-0 lead which he held until the end, in fact getting a third break to seal the set. It was the second win for Sinner against Ruud in as many matches.

The win also meant, that Sinner will break into the top 10 of the ATP rankings for the first time next week. “That’s great, but I hope that this won’t be my max”, he said after the match. 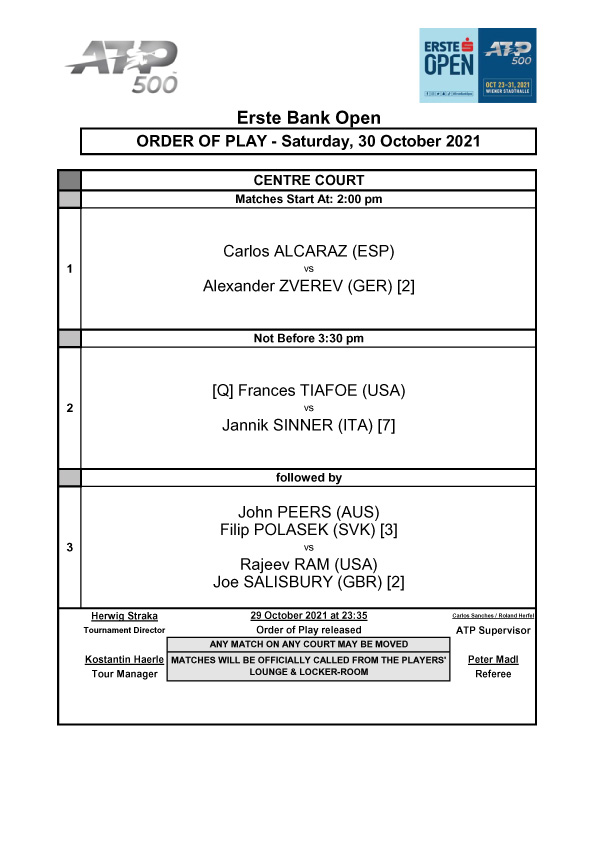